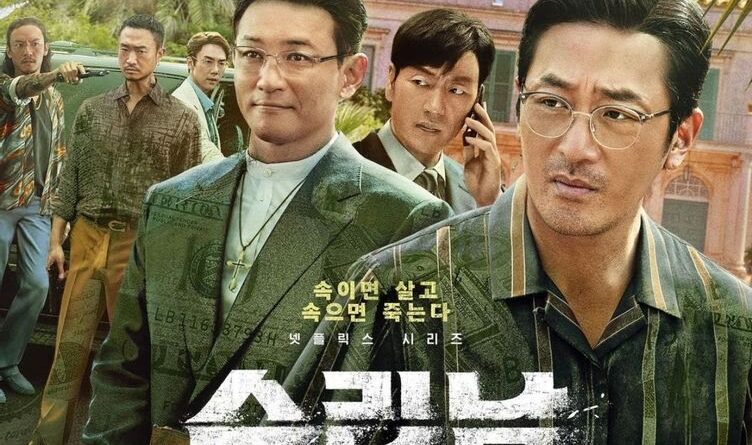 Narco-Saints is the latest original South-Korean crime thriller from Netflix loosely based on a true story. Narco-Saints follows the story of Kang In gu who is a struggling businessman trying to make ends meet for his family in Korea.

Hope arrives in the form of his high school friend Park Eung-soo who has a lucrative business deal. Eung-soo invites In gu to invest in his skate shipping business. They planned to get skate fish from Suriname for almost nothing and sell it on the Korean market at full value. In gu does the math and he sees this as an answer to his financial trouble. They arrive in Suriname and that is when things get messy, as In gu finds himself on a secret undercover mission to help authorities capture a drug king.

Upon arriving in Suriname, In gu ran into trouble with the leader of the Chinese gang Chen Jin who wants to be paid an unreasonable amount of protection money every month. He and Eung-soo are troubled and don’t know how to handle Chen Jin but a trip to the church gives them a solution.

At the church, they are lucky to get an audience with the charismatic Pastor Jeon Yo-hwan. At the time, he felt like an answer to their prayers especially after he managed to get Cheng Jin off their backs.

Unfortunately, In gu and Eungsoo had no idea that they had just jumped from the frying pan into the fire. Things take a turn for the worse when their skate shipment is found laced with cocaine. Neither In gu nor Eungsoo can explain how the cocaine got on their skate. In gu is arrested and serious charges of drug trafficking are brought up against him. With the justice system in Suriname being corrupt and unreliable, he ends up serving time.

During his imprisonment, he is visited by a National Intelligence Service agent named Choi Chang-ho who drops two bombshells on him. First, his beloved friend and business partner Eungsoo is dead, presumably murdered by the drug lord involved in lacing their shipment with cocaine. Second, Pastor Yo-hwan is not the generous, dedicated man of God he parades himself to be.

As it turns out, he is an infamous drug lord who has slyly managed to slip the hands of authorities for more than 18 years. He is also the person who instigated all their troubles and killed his friend.

Agent Cho makes In gu an offer to drop the drug charges against him but in exchange In gu will have to go on a suicide mission. Agent Cho has a plan to bring Pastor Yo-hwan to justice but they can’t arrest him in Suriname as they don’t have an extradition treaty. The only way to get Pastor Yo-hwan is if In gu can convince him to expand his business into the American market.

In gu is left with no choice but to enter the lion’s den and use his smooth tongue to trap Pastor Yo-hwan and still keep his head attached to his neck.

The show has a great, talented cast from Ha Jung Woo, Park Hae Soo, Hwang Jung Min, and Jo Woo-Jin. They all delivered on their characters and in large part, this is one of the biggest reasons the audience continued with the show even after the plot becomes predictable. This show would have a greater potential had the storyline not worn down with predictability and unnecessarily drawn out.

Pastor Yo-hwan’s character was engaging given how he ingeniously found a way to quote the Bible to effortlessly explain his drug business. In gu is a charming character who uses his mouth to smooth talk his way out of life and death situations without breaking a sweat. On the other hand, Agent Cho is a man who lives for his job and quickly changes his personality to whatever is needed to get the job done. If he has to be a suave gangster then best believe he will show up as one.

The show is still worth watching though, as it redeems itself in the two last episodes by raising the stakes, and the tension is perfectly amplified.

The reveal of the second mole in Pastor Yo-hwan’s team and Agent Cho airdropping into Suriname to arrest Pastor Yo-hwan gave us some amazingly executed action scenes.  It was impressive and thoroughly engaging seeing Byeon Ki-tae flexing his muscles in his fighting scene with Pastor Yo-hwan’s personal bodyguard. This crime thriller is not the best we have seen but it has its moments and makes for a relatively good watch.

The English – Episode 3 “Vultures on the Line” Recap & Review 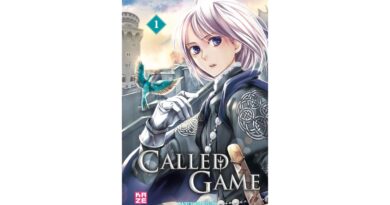 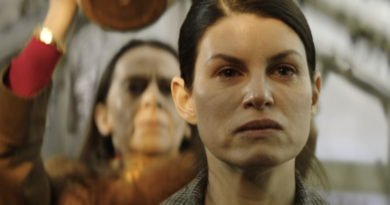